And Now a Story About Bunny Poop

I was working today on compiling a program that would help a company stream their webcam over the Internet.  I decided to try out a program called Xuggler.

Anyone that's ever tried to compile software on Linux knows that ./configure pumps out hundreds of lines of checks in a few moments' time.

This time was different...

No, those lines weren't highlighted in bright white when I ran the command. I happened to see them while it was scrolling by at 20 lines a second.

Reminds me of the Mozy backup service's Terms & Conditions.   A couple years ago, I decided for no apparent reason at all to skim through them, and it said.  "Furthermore, you agree to use Mozy for good or for awesome." They've since changed their terms, but I assure you that it was there. It's not so much that it's in there that's funny, it's that it's almost invisible and yet still people notice it.

Don't Get Me Wrong - I Love the Bunny

I got a Russell Stover solid milk chocolate bunny to celebrate Easter with.  As I was eating away on it, I saw a nice little letter on the back saying how they use only the finest ingredients.

And then, of course, I had to read the ingredients.  I'm very glad that they use cocoa butter for their chocolate.  I can't stand “chocolate” made from palm kernel oil.  But I noticed that they also use vanillin.

Why vanillin?  There has to be what - one drop of vanilla flavoring in the whole thing.  Why on earth would you cut corners there?  For those that don't know, vanillin (imitation vanilla extract) is usually commercially extracted by soaking burnt wood or coal tar in alcohol.  Yum!

Google Maps now automatically routes around roads closed for road construction. I was trying to get to somewhere on I-64 on the west end of St. Louis. When I asked Google Maps for help, it sent me all around the city, starting on I-64, then taking I-44 southwest, and then I-270 North to meet up with I-64 again.

I know that I-64 is closed from the Kingshighway exit to I-170 but I didn't think Google Maps knew that. I tried to drag the route onto the closed section of I-64 and it wouldn't let me - it acted like there wasn't even a road to drive on. Technically, there isn't at the moment.

So that was pretty exciting to me. Although I wish Maps would at least tell me why it redirected me, so that I'd be sure that their route-planning isn't just getting dumber.

Overdrawn at the ... Bank

I logged into our First Bank account, because I wanted to check on a couple things (we are moving to a new checking account this week. When I got there, I saw that I was $45 overdrawn!!! So after a nice, long panic I found check #2111 (not my check). Ours are in the 600's. Someone else's check for $57 posted to our account.

Their electronic check reader (or human) read the 229 as 559 and it posted to our account.

Aveo Is Not Beautiful

I just got an email about General Motors announcing their restructuring. Then I went on a Wikipedia run to look at what's new. Then, I got bored and clicked on Daewoo, which they have a major stake in (> 50%). Apparently Daewoo is South Korean - I had no idea. Yes, when I visit Wikipedia, I will read about cotton and werewolves in the same sitting.

So then I read that a bunch of Daewoo models are sold in the US under the Chevrolet name. The Chevrolet Aveo is actually a Daewoo Kalos. I had to drive one of those when our car got rear-ended. They are not pretty. They don't even feel safe. When we went under a bridge, the car shook from the "wind tunnel" effect! 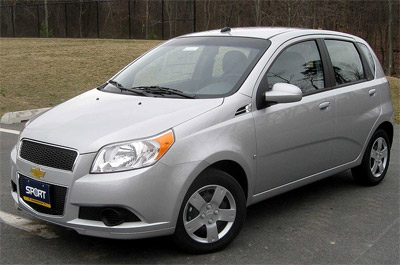 The ultimate irony is what I read when I looked at the article about the Daewoo Kalos. They chose the name Kalos, because the Greek word καλóς means beautiful. I dare a commenter to say that they like the way the Aveo looks.